Have you ever heard your humans scream as they try not to run over a horse that has jumped out in front of the car without even a word of warning? I have.

The road to El Cuyo is full of adventure for humans and their dog best friends and I’m going to tell you all about my trip to this gorgeous part of Yucatan and share some hints to having a very pet friendly time.

I’ll admit that I watched my humans with suspicion as I saw the suitcases come out. Were they planning on making a hasty escape? Then I saw them start to pack my special bag, and I knew they were not, and I joined them in their excitement. They told me that we were going to a place called El Cuyo and that I would have to wear my very important doggy seatbelt harness. Thank goodness I did. Silly horse.

My packing list includes enough food for the days we’ll be there, plus some extra in case we need to share with a hungry dog. It’s lucky we did because at our first stop for lunch, there was a very scaredy dog who my humans said looked like she was feeding puppies. She did not like humans or big dogs like me, but she was so hungry and thirsty. We put food and water down for her and shared from a distance. I also ate tacos. I love tacos.

My humans said the food was freshly cooked and reasonably priced. There is a farm shop where they sell products from the ranch, too. The ranch and restaurant are called El Chaparral and are just before Sucila, on your way to El Cuyo from Merida.

We also found a place that my humans say they want to visit again because the food was so delicious. It was in a cute village called Kikil. It is called Ana Kikil Barbacoa . I can recommend the tacos, personally.

I stuck my nose in the crack of the window to smell all the interesting animals along the way. There were a lot of cows. I have never seen so many. My humans said it’s ranch country and that is why there were many gates with interesting names that said ‘rancho’. What was also very interesting was all the cenotes everywhere. The whole landscape is covered in them, and they are sometimes dried up, but mostly like ponds. Some of them were huge like lakes.

It takes about 4 hours to drive from Merida to El Cuyo depending on how many times you stop to have tacos, how many times your humans stop to take photos and how many times random animals and potholes jump out in front of you. As we got closer to El Cuyo, the road became narrower, bendier, and the landscape wilder so you will probably want to drive more slowly. My humans saw a baby jaguarundi running along the side of the road, which was very exciting for them. Looked like a cat to me, but what do I know?

To get to El Cuyo, you have to drive across a long thing that seems like a bridge but is called a causeway. There is a difference, apparently. Humans are weird. As we crossed, I could smell the marshy smell that mangroves make and then we could see lots of birds like pelicans.

When we arrived in the village, we realised that it was a very peaceful place. The roads are all sandy and most humans were getting around on small motorbikes or on bicycles. No one seemed in a hurry.

When my humans were looking for a place to stay, it was essential that it would be pet friendly. They have lived in a small community before, so they knew that a local connection would be important. It seems that they got lucky because a lovely woman called Saydi from Say Yes Mexico got in touch and told them about a casita, Villa Xhail, that she manages that seemed like a perfect fit because it was right on the beach and I was welcome. Saydi helped us with all the information we needed and that’s how my humans got to take me to stay in the cutest little pink casita you have ever seen. It even had a thatched roof. I will put a link to the Airbnb listing for this casita at the end of my article if you are interested in staying there, but please leave enough days for my humans to take me again.

The casita was a perfect little beach house. It was clean, cozy, comfortable and had everything you could ever need. I liked it because I could lay in the sand while my humans talked about human things and shared snacks with me. My humans liked it because it had views of the sea and air conditioning in the bedroom. The problem was that they didn’t want to have the air conditioning on because they wanted to hear the waves making wavey noises. So they opened the windows and let the breeze flow in. The sound of the waves made me dream about being a Merdog.

The beach in El Cuyo is long and wide. There are not many people there or even many dogs. I did see one boxer from a distance, who I was sure was my girlfriend Grace, the rescued boxer, but she didn’t listen to my woofs, and I realised it was not her after all. I was sad, but only for a second because I made a friend called Coco the Nut. I carried him around because he had no legs.

My humans were only able to stay for two nights so the day after we arrived, they drove me to another village called Rio Lagartos. This is the best place to get boats to look around the big nature reserve and to visit the big pink lakes at Los Colorados. The guides all said they would offer pet friendly tours and welcomed me onto their boats, but my humans had other ideas and I’m so glad they did.

We went to a pet friendly restaurant called La Torreja, which had a tall palapa above it and a big pink bird painted on the wall. I thought the bird looked a bit scary, but apparently humans love to look at big pink birds. They were everywhere in this village. Strange because Lagartos means crocodile and I’m sure they aren’t pink. I keep hearing about flamingo tours, but I thought that would be dancing humans. Who knows.

My humans ordered a lot of food. More than normal humans. Then they had the nerve to tell me that I can’t eat guacamole or ceviche and that there were no tacos coming. The people who worked in the restaurant were kind and loved dogs. We were all very happy. But still. No tacos. WTH? Even worse is that they do serve tacos. My humans just didn’t order them.

Rio Lagartos is a pretty little village with a harbour, where you can catch boats and find lots of sunburned humans who have come in vans from places like Cancun to see those big pink birds, I was telling you about. Some of the tour guides are a little bit, wait, how did my humans put it…oh yeah…pushy…so be prepared for that. After the laid-back vibe of El Cuyo, it was a bit of a shock. Rio Lagartos depends on tourism, so the people have to work very hard and we all understood that. We also met some fun and smart tour guides too. If you see Ramon or Victor, tell them Sir Rodders says ‘Hola!’

There are two ways to get to Rio Lagartos from El Cuyo. A way that seems shorter but is probably longer because it is a very long sand road and a way that seems much longer, but it is on paved roads. You can hire ATVs or even get a guided ATV tour on the long sand road. Unfortunately, they said I wasn’t allowed to drive one because I couldn’t steer with my big fat paws.

I’ve had a lot of medical issues, so my back hurts if I do too much. So, we didn’t go out much in El Cuyo except to the incredible beach, where we met some interesting and kind people, and I met my new friend Blanquita! She’s my tiny friend. I think everyone needs a tiny friend. She’s less work than Coco because she has legs, so I don’t have to carry her around. El Cuyo is full of dog lovers and dogs are welcome just about everywhere. I got a lot of attention and love from all the nice people, and we saw some lazy and happy village dogs hanging around and trying to keep cool.

My humans were so happy because all the dogs were so well cared for. Also, the village and beach are incredibly clean. You can tell that the people who live in El Cuyo really care about their home. The thing my humans said they loved most of all is that there isn’t a lot to do in El Cuyo. It’s for relaxing. Oh, and kiteboarding. I forgot about that.

I think you can tell that I’ll be going to El Cuyo again in the future. If you want to find out more about this very special, small, and incredibly pet friendly village, just let me know. I’ll be happy to help! Our special little pet friendly pink casita that you can book too through Airbnb.

Read further for my top tips on how to be a great guest with pets.

Dear friends. You will notice that there are going to be some changes to our Instagram. 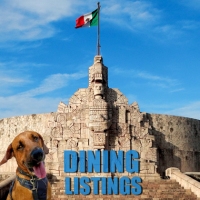 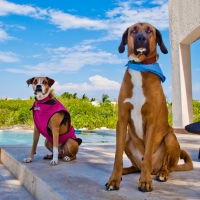 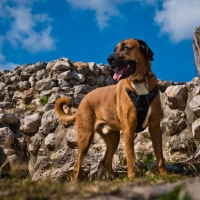