Did you know that there is a clear, magical liquid that helps dogs like me, and it makes humans silly and funny? Well, neither did I humans, until I discovered Mascota Tequila. I am a dog with a nose for interesting stories, so I thought I’d dig in and find out more about this fascinating drink, and why this unique brand has become involved with the welfare of dogs.

The founder of Mascota Tequila is an especially kind and glamorous human called Victoria Araceli Vann. Since the first thing that caught my eye – and I should point out that my nose is much better than my eyes, so it had to be pretty incredible for me to notice it – was their bottle. I told Victoria how the distinct, dog shaped packaging had inspired me to sniff out the company and how much I admired the design. Victoria started telling me the Mascota Tequila tail…I mean tale.

“Thank you for the kind words. My vision for the brand was to create a one-of-a-kind product that would help raise awareness for animals in need, and to raise money for animals in rescues as well as shelters. As my background is in the beverage industry, I combined my favourite spirit, tequila, along with my passion for animals, and developed my vision for Mascota Tequila.”

Yes, but what about that handsome dog who was the model for the bottle? I had to know who he was and I was delighted to find out that he is one of her family members.

“The inspiration for the bottle design arose from a family pet named Maximilian. Although the bottle is in the design of an English bulldog, it was created as a brand to represent all animals. Additionally, my background is that of an English as a Second Language (ESL), teacher to kindergarten, first & second grade elementary school children, and the word Mascota in Spanish translates to; ‘pet,’ or ‘mascot’.”

It comes as no surprise that a human as smart as Victoria would recognise the beauty of dogs and would know that everyone would want to buy a bottle shaped like one, especially one as stunning as Maximilian, but I had to ask why a businessperson would decide to use profits to help other dogs. My tail wagged when she gave her answer.

“I have a sincere love of animals, and because there are so many animals that bring happiness to so many, and even more now, given the global pandemic wherein there is such widespread isolation and loneliness, animals can be a light in a darkness that brings joy and happiness. Unfortunately, many animals in shelters and rescues don’t experience this opportunity because simply there aren’t enough resources for shelter and rescue organisations to provide adequate support in finding homes and care, as many animals are euthanised without ever having a chance. It is quite expensive to run these organizations. They need financial assistance with supplies, food, medication, beds, professional services, etc. From the inception of Mascota Tequila, the idea was to help raise awareness for animal adoption and also lend financial support to non-profit shelters and rescues in an effort to bridge the gap between the animals in need and their forever homes. Our plan in moving forward is to donate funds to each country or region that sells Mascota Tequila in an effort to help as many animals as possible, worldwide.”

Now, I know that this interview was not about me, but I’m a handsome dog too, so I had to ask if Victoria would you ever consider making a Sir Rodders shaped bottle. I mean, c’mon, I’m a perfect model. I couldn’t believe it when she said that while it’s not in the pipeline yet, not to give up hope! She tried to let me down gently, really.

“Since I introduced the brand, I’ve received numerous requests to produce various dog bottles to represent other breeds, but at this time it is a little premature as I want to primarily focus on introducing the Mascota Tequila signature bulldog bottle as it is, prior to any additional line extensions.”

I love women. Women are the humans who saved me from dying on the streets of Mexico City, so I told Victoria that I was bouncing all over the place when I heard that Mascota Tequila is owned and operated by women. Please don’t think I’m trying to charm my way into become a Mascota bottle model. OK. I admit it. Of course, I am, but I really do mean it about being happy that women are at the heart of this business because women have the biggest, strongest, bravest, kindest hearts of all.

“Thank you! It is awesome to be a woman, and even more so to be a woman in the tequila industry! It is very unique as traditionally tequila has been known to be a “man’s job” from harvesting the agave to distilling the liquid, to designing a one-of-a-kind bottle packaged in a unique doghouse box. Everything about this brand is unique! Make no mistake, that everything about this brand is extremely hard work, and while it may require more time to complete, from start to finish, as it is quite labour intensive, at the end of the day, we all support each other, and we empower each other as well, without a doubt. The response from people all throughout the world to Mascota Tequila is a true testimonial to the vision, dedication and creativity of a woman’s touch and innovation, that makes this brand unique and quite special indeed. It is the very essence of the beauty of the brand.”

Then it was time for me to get to the nitty gritty or, as I say, the boney woney. I am a dog, so I cannot drink tequila, but I do eat tacos. I needed to know which tacos go best with Mascota Tequila. If my humans are going to be drinking it, I need to make sure that they have tasty snacks we can share. Victoria confirmed that we should all be encouraging our humans to drink Mascota Tequila because she says that they go best with my favourite kind of tacos. “Tacos with extra meat and cheese, and not too spicy!!!”

I bet you are all thinking about what a great gift Mascota Tequila will make for Christmas. Don’t worry. I asked how you can get it. She reminded me firmly that a dog is not just for Christmas, especially a dog full of tequila. “It’s, not only for great Christmas gifts, but I believe it will remain popular all throughout the year as this is a great cause. The efforts are huge, reaching far and wide and they do not stop. The need continues to grow. Currently, the tequila is being introduced into the USA market first, with additional plans to launch into Mexico, in the new year and abroad. Visit the website mascotatequila.com to order product.”

I was so happy that Victoria took the time out of her incredibly busy schedule to talk to me. I asked her if there was anything else she wanted to share with my readers because she knows that you are the kind of humans who love magical clear liquids that you can eat with tasty tacos, which you will, of course, share with your dog. “Mascota is more than just a tequila brand in a pretty bottle. Mascota is a symbol of hope for animals in need, and we are extremely overwhelmed and humbled by all the love and support we have received from people around the entire world, and that includes you, Sir Rodders, for taking the time to reach out to us to introduce your readers to this very special brand, to sip for a good cause. Thank you, wholeheartedly and completely.”

So, remember humans. Tequila is not for dogs, but it now does come in a beautiful dog shaped bottle. You never know. One day that bottle might just look like me. I’ll keep dreaming. Don’t forget the tacos! You can find more about this pawtastic tequila at the Mascota Tequila website.

Here us dogs are looking at the humans panicking. Come play with us. We're more fun anyway. #instagramdown #facebookdown #playwithyourfuckingdog 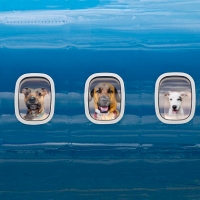